Cold or low level laser therapy (LLLT) is a true 21st century technique that has been cleared by the FDA. We have successfully treated patients suffering from tendonitis, bursitis, plantar fasciitis and carpal tunnel syndrome. 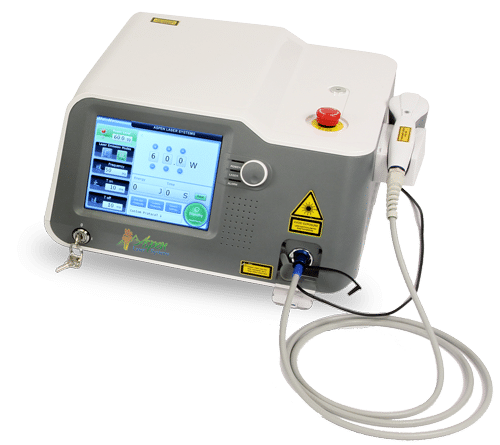 WHAT IS LASER THERAPY USED FOR & HOW DOES IT WORK?

What is Laser Therapy used for?

It works by increasing ATP (adenosine triphosphate) synthesis in the mitochondria,activating the electron transport system, and many other biochemical and biophysical reactions in the tissue.

How does Laser Therapy work?

How is it possible that one modality can have a positive effect on so many different tissues? The answer is that it works mostly in the intracellular level. The photons, which are the packets of light energy produced by the laser, penetrate through the skin and into the cells. The cells are then able to absorb and convert this light energy to chemical energy that is able to promote healing and pain relief.

The light energy is absorbed in the cytochromes (receptors in the cell). As a result, the rate of ATP production from the cell is increased. Bringing the rate of cell metabolism from a depressed rate, as is the case in damaged tissue, to a normal level.

As a result of this increased cell metabolism, many different biological effects may occur. Cell repair is stimulated among all different tissues; tendon, bone,skin, nerve and muscle can all be affected. Laser light has been shown to regenerate nerve cells and restore nerve function.

There has been shown an increase in prostaglandins, increased enzymes and growth factors, and cellular products after Laser Therapy. Angiogenesis can occur and reduction of fibrous tissue formation, which is beneficial to healing chronic wounds. The end results of all these biological effects are reduction of pain,resolution of inflammation and increased tissue repair.

BIOLOGICAL EFFECTS OF A LASER

EFFECTS OF LASER ON PAIN PATHWAYS